Growing up and looking at the effects of Popular culture on the formation of the physical facial features of black woman I am not surprised that so many cosmetic surgeries were happening when I was younger.  I recall people like Janet Jackson investing in changing her nose, and lips and cheeks to conform her looks to that’ of a Caucasian woman even bleaching her skin to appear lighter. For most of my life Black woman’s features were hardly celebrated, our eyes said to be too dark, lips too big, nose too broad and shape and curves unacceptable. Me, Alicia age 13 walking into my middle school at the time my dark brown hair freshly braided body clothed in the widely worn Rocawear apparel, brainwashed to think that to be accepted into the black  community as a young black girl who grew up a Suburban sheltered lifestyle I would have to dress the part. Another issue within the black community, not accepting our own. Because I was lighter than a lot of other black girls around me, my hair past the “standard” black girl length, I wasn’t up to date with the slang and lingo at the time I wasn’t truly “black”.

But what does it even mean to be truly “Black” to be a true African Canadian woman, is it determined by the shade of my skin, or is it based off my story and the lifestyle I live. If I’m not from Jane and Finch, or Scarborough ( urbanized  and predominantly black area in Toronto) does that make my struggles less authentic. If I wasn’t surrounded by guns, drugs and come from a father-less home is my skin genuinely black, or have I suffered from a skin pigment that made my shade darker. Yea, there are black woman and men who don’t come from the same environment that people assume most blacks come from. I’m sorry that I grew up in a financially stable home with my mom and dad who were both working my entire Life. Am I still black enough ?
But that’s not the point is this rant, let me get back on topic.
Inherited from our ancestors, our bodies weren’t asked for but were what we were born with, made to live with and embrace passed down from our mothers, and grandmothers. It seems as if no matter what was done procedure wise, a black woman’s features could and would never be forgotten or disassociated with who she was. Does having full lips make me less of a acceptable candidate for a corporate position, does the roundness of my behind distract you that much that you look pass me, ignoring my worth and looking at me more as a lustful entity. I mean why should I be made to feel that my lips are too big, why am I made to feel that my nose is too broad, nostrils enlarged and oversized compare to the small frame of my face.
Life has a way of making me laugh though, I am humoured by the way the world has changed around since the days  of my youth.
The same features we were reticule and shunned for are the same features that are being replicated, duplicated and redone. Laughed at for our full lips and child bearing hips  that now the urban music world is embracing and promoting. Kim K West, Khloe K, CoCo, even Nicki Minaj all have had their noses, bums, and lips done. Is it funny that all the woman have made their bums bigger… But I thought having an enlarged behind wasn’t the “social norm”.. Is it funny that Kylie Jenner the sister of Kim K, And Angelina Jolie, wife of the well known Brad Pitt both had their lips done, made to look plumper and more round.. What are the odds.. 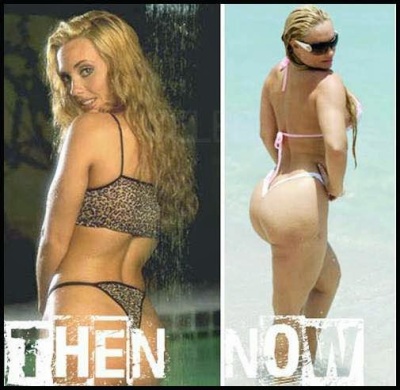 Tanning salons were around for many year but it hasn’t been until recently that’s a large number of woman of the Caucasian persuasion have started spending hundreds monthly  to darker their complexion hoping for a sun kissed glow.
I am in no ways attacking black women, white woman or even Asian woman but are more so bringing attention to a change that’s taking over. I am aware that sex sells, I know that being looking and acting sexy is what the people want to see, but that’s not the point. There is such a change in the world that I can’t keep up, black woman are trying to look white and white woman are changing their features to that of a black woman’s and then you have Asian woman getting double eye lid surgery to give the illusion of European inspired eyes. Is no one happy with themselves anymore.
A few days ago a picture of Kim K polluted my Instagram timeline, one of her scantly clad and basically nude with a high bun copying a picture once taken in 1976 by a black model. Controversy stings all social media as people from all colours and creed and walks of life rant on and on about their disapproval for the “artistic” piece. Why is she exposing her silicone filled behind, why is her breasts and vagina out there, something that should be shown to her Husband and him alone. Yea I know she’s not the first nor the last but… Really.

View all posts by simplilici